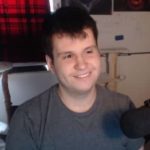 He and his wife have been married since April 2018. Their cats are called Coco and Noah.

It’s a nickname that his school friends gave him.

Baumiandcats worked on his English as a kid because he really wanted to be able to read things in English. Outside of video games, he studied judo and also played volleyball and soccer while he was growing up. His favorite games when he was younger were Warcraft III and the Fire Emblem series.

While in high school, he and his friends got into DotA 1. After a couple of years, it started feeling a bit stale to them, so when they got into the Heroes of Newerth (HON) closed beta in early 2010, they were happy to try it out. After high school, he went on to study computer science at university, but dropped out during his first year after speaking to his cousin who worked there, as he felt that it was unnecessary and would just make him miserable.

He started watching a lot of YouTube videos in eighth grade as a coping mechanism after his father passed away. During that time, he discovered TotalBiscuit’s channel and started watching his content, even though he was really poor at English. He attributes his current fluency in English thanks to watching TotalBiscuit’s streams, as well as to the number of manga that he read. This is what later inspired him to try creating his own content and podcasts later on.

Outside of video games, he also participated in judo, soccer and volleyball when he was growing up. When he was older, he started playing DotA 1 but switched to Heroes of Newerth (HON) when it released in 2010, as he felt that Defense of the Ancients (DotA) had become too old. He then played HON for the next three years, before switching to Dota 2 when it released in 2013.

In 2015, after completing high school, he went to university to study Computer Science and then decided that it wasn’t for him and decided to drop out as he was already earning enough from his YouTube channel. He also did an internship at a radio station for a few months.

He started uploading YouTube videos for fun in November 2008 and started streaming on Twitch in mid-2013. He started uploading HON content to YouTube on March 30, 2010, soon after he got into the closed beta. He initially uploaded in German, but later switched to English. In late 2011. This saw his viewership grow substantially. He then switched to Dota 2 three years later. He created his Twitch account in April 2011. Over the years, he slowly grew is follower and subscription base on both Twitch and YouTube and Twitch so that he was already making a decent income by the time that he graduated from high school.

The idea of pursuing professional Dota 2 never appealed to BaumiAndCats due to the time commitment involved. In July 2019, he successfully completed his Kickstarter campaign to launch his own card game, Disastles that is available for free online and for purchase in hardcopy from his website. He has since started working on another cad game called Chroma: Bloom and Blight.

According to his Twitch overlay, BaumiAndCats has ~600 subscribers. As he generally attracts ~350 viewers, this should generate him a monthly income of at least $1,500 USD, excluding additional revenue from tiered subscriptions, merchandise sales, donations, Twitch cheer bit contributions, advertisements and sponsorships.

He doesn’t have a set schedule, but tends to stream for at least a couple of hours each day on week days.