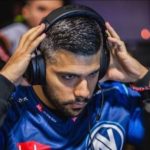 His parents divorced when he was quite young. He has a brother. He married his wife in December 2016 and they have a dog.

His former teammate, Kunka, gave it to him during his time playing CoD 4, because his previous gamertag, ‘Wiryyyyy’ was a bit messy. He like it and stuck with it.

Apathy first really started becoming interested in competitive gaming when he and his friends started playing Halo 3 when he was 13 years old. He attended his first Halo local LAN tournament that same year and continued to participate in tournaments over the years. However, he wasn’t able to practice as much as he would have liked, due to his staying with his father, who didn’t have internet, on the weekends.

When he was growing up, he would often watch YouTube videos to learn how to improve. A couple of years later, he transitioned to CoD 4 because he was bored with Halo 3 and his friends were recommending it. He enjoyed it and began participating in many public matches.

He hadn’t initially considered becoming a professional player, but as he gained rankings and started playing against more skilled players, they encouraged him to join their teams for Game Battles. One day, he decided to try it out and enjoyed it. He then moved on to CoD: Modern Warfare 2.

Apathy was inspired to attempt a streaming and pro-player career after tracking Nadeshot’s content and success. However, he was embarrassed for his high school peers to discover it, so he put off trying it for a long time. However, he still participated in many public matches in order to get noticed. For the same reason, he participated in as many tournaments as he could.

He eventually joined a team and they participated in various LAN tournaments. He moved on to different teams and slowly gained recognition. This team continued into CoD: Black Ops 1, but soon went their separate ways. He then joined vVv Fly Society, and they managed to rank high in the 2011 MLG Columbus.  In 2013, he took a break to enjoy his senior year of high school and returned to the scene for Black Ops 2 in university.

The next year, he started really gaining motivation to seriously pursue a pro-CoD career. He has switched through many teams over the years. It was only after two CoD titles that he finally started being noticed and making his mark on the scene.
In October 2021, he announced that he would be retiring from professional esports in order to focus on full-time content creation and being a dad.

His schedule is inconsistent due to his professional commitments.