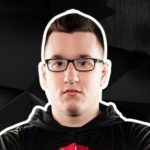 His original username was ‘Headaches,’ but he later shortened it. He doesn’t remember why he chose his original tag.

Aches has played all eleven Call of Duty (CoD) titles. There is very little personal information available about him.

Aches has been part of the competitive scene since late 2010 and has won 20 Major CoD championships over the years, including the 2014 and 2018 CoD World Championships. He plays on a PlayStation 4.

According to his Nightbot, he has ~100 subscribers, which would minimally earn him a monthly income of $250 USD. This excludes additional revenue from other sources such as his team salary, tournament winnings (which Esports Earnings estimates at ~$468,200 USD), sponsorships, tips, and Twitch cheer bit donations.

He has an inconsistent schedule due to his competitive commitments.