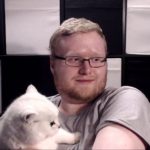 His parents are supportive of his career path. He has a cat named 'Arthas.'

A_Seagull’s name originates from a Half Life 2: DeathMatch developer glitch that allowed users to apply a cheat code to allow them to play as anything in the game. He chose to become a seagull and enjoyed flying around. His name is therefore a tribute to that jaunt.

A_Seagull has been gaming since he was a child. In 2005, he started getting into various less-known fps games. He has always had a competitive streak, which is why he was already playing in teams on Half-Life 2: Deathmatch by the time he was 12. In late 2008, he started playing Team Fortress 2 and proceeded to participate in those tournaments for about seven years. He took a year of from gaming when he was sixteen to focus on college, but then continued even while he was completing his college degree.

A_Seagull competed in his first LAN even in 2010 and then again in 2012. From there he continued to compete in various tournaments, aside from his hiatus during his first year in college. Upon finishing his college course, he transferred to Washington State University to pursue a degree in Computer Science. That was also around the time that the Beta version of Overwatch was released, which inspired him to try playing and streaming it.
His stream channel grew exponentially, to the point that he approached his parents with the possibility of attempting a career as a competitive Overwatch player and streamer. They recommended that he take a semester off to see how it would go and he hasn’t looked back since. He has since retired from professional tournaments in order to focus on his streaming career.

He is estimated to have over 10,000 subscribers, at least 5,150 viewers per stream. That means that shouls be earning at least $35,000 USD per month, before receiving additional revenue from sponsorships, tiered subscriptions, tips, Twitch cheer bit donations, tournament earnings and advertisements.