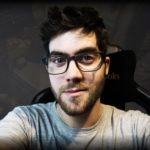 His name is based on the fictional drug ‘Valkyr’ from the Max Payne video game franchise.

Valkia started playing console video games when he was young and moved on to computer games when he was around ten-years-old. In 2010, he started working for Overclockers as their UK marketing manager and graphic designer. This exposed him to streamers and the streaming industry, which peaked his interest. In 2015, he finally decided to attempt streaming his own content.

In 2016, he started playing Overwatch soon after it released. He attributes this to his success as a streamer. Once his channel had grown enough, he quit his job to focus on streaming full-time. However, in March 2021, he announced that he would be retiring from streaming due to health reasons.

Valkia is estimated to have ~3,200 subscribers. This would net him a minimum monthly income of $8,000 USD, excluding revenue generated by tips, sponsorships, merchandise sales, and advertising.

Streams are stopping, but it's not the end link