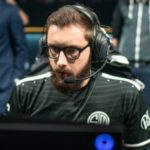 His parents still live in Denmark. He has two brothers.

TSM_Bjergsen was picked on in school and found solace in the escapism of video games. Due to his difficult childhood and saw professional eSports as a real opportunity. The decision to focus on professional gaming rather than pursuing tertiary education was easy, as he hadn’t had a positive experience during his school years and wasn’t eager to go through more of the same. When he was 14 years old, he played DotA for a while, before getting into League of Legends. He also played Counter-Strike and World of Warcraft in his early teens.

Bjergs started ranking in LoL and was noticed by Copenhagen Wolves' manager, Deficio, online around 2011. In October 2012, Deficio invited him to join the Copenhagen Wolves to participate in the LoL Championship series. He was sixteen at the time, and although he was able to participate in the Dreamworks competition, he had to wait until he turned 17 in the summer during the third week of the Riot S3 EU LCS Spring tournament.

After his first tournament with the Copenhagen Wolves in 2013, he started streaming. He found streaming to be a healing experience for him, as he received positive feedback from his followers and was able to help others to progress in LoL.

At the end of 2013, he was invited to join Team SoloMid and accepted the offer. He has lived in the team house and participated in tournaments with them ever since. His parents have always been supportive of his career choice. He left TSM in October 2021. He joined Team Liquid a month later on a two-year contract.

TSM_Bjergsen is estimated to have ~600 subsrciebers, with an average viewership of ~12,170. This should earn him minimally $2,100 USD per month, excluding additional income from sponsorships, tiered subscriptions, tips, team salary,Twitch cheer bit donations, tournament winnings, and advertisements. He is estimated to have earned ~$220,000 USD from various tournaments.