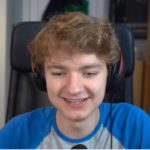 He decided to add ‘Innit’ to the end of his name, because that is how everyone finishes their sentences where he is from.

TommyInnit grew up playing video games and started watching YouTube gaming channels as he got older. He and Badlinu have been friends since the met at a children’s club during primary school.

He is currently attending college.

When he was 12, he decided to attempt creating his own YouTube content on a channel called Channelnutpig. He uploaded his first video on October 9, 2015 and it featured Terraria gameplay. However, he stopped when he was thirteen after his schoolmates discovered it and started bullying him about it. However, at the same time, he started livestreaming his Minecraft on Twitch in November 2017.

He streamed for a year, but then took an eight month break before returning. Although his channel had been steadily growing, his big break came when he was invited to join the SMPLive server in May 2019. He then saw more growth when he began uploading Skywars content, and then again with Skyblock. He has been streaming consistently ever since. He then began uploading to his new YouTube channel in September 2018 after being another attempt after discovering TheOriginalAce’s channel. He has since gone on to create a number of other channels as well. The first 2020 Covid lockdown also caused his follower count to grow tremendously, as during that period alone, he went from 100K to 1 million followers. This was largely due to he and Tubbo grinding content together during that whole time.

According to his Twitch overlay, TommyInnit has around 30,000 subscribers and usually attracts hundreds of thousands of viewers. This means that he is receiving a starting income of $105,000 USD per month. This is before he gets more revenue  from sponsorships, merchandise sales, tiered subscriptions, Twitch cheer bit contributions, advertisements and tips.

Varies from week to week.