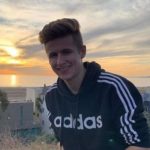 He has a sister and currently lives with his parents.

Symfuhny was introduced to video games when his grandparents bought him an Xbox 360 with Halo. From there, he moved on to Call of Duty. As he gained more skills, he also became more competitive. In 2013, he was inspired to try out streaming for fun with some MineCraft gameplay after watching some other streamers, but it didn't really work out for him.

A few years later, he discovered H1Z1 and became addicted to it. He managed to achieve top-rankings for a few seasons, and then decided to attempt streaming again after his friends and members of the H1Z1  community encouraged him to. However, it was when he switched to Fortnite  soon after  it came out that his popularity and channel really started to grow. This was largely due to his impressive editing skills. On March 19, 2019 he was signed on to NRG Esports' Fortnite team. He remained with them until September 2020.

Why Symfuhny Is Blowing Up link
Yesterday was the final day of my contract with NRG. link
Symfuhny's Twitch chat commands link