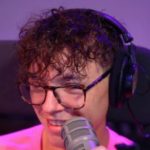 During elementary and high school, he was a bully and has tried to work passed that as an adult. He also hung out with skaters for a while during middle school. Although he was born in Illinois, his family moved to Suamico, Wisconsin when he was in high school.

After high school, he went on to study Video Art at the University of Wisconsin, Milwaukee. However, he later dropped out after two years to pursue YouTube. His parents weren’t crazy about the idea, but they tried to be supportive anyway.

He started creating Minecraft animations and Let’s Play content on his private YouTube channel while he was in college. After quitting college, he partnered with Machinima.

He and his friends started creating skit content on their Sugar Pine YouTube channel together in July 2015. This was his fourth or fifth attempt at starting a project with friends. Previous attempts had included Digital Devise, SupetPanicFrenzy and BAHMLounge.

He then also joined SourceFed in late 2016. Since then, he has joined many different projects and has also become more focused on creating consistent Twitch content.

SteveSuptic’s Twitch chat bot puts him at around 1,580 subscribers. As he generally attracts over 1,500 viewers, this should generate him a monthly income of at least $5,530 USD, excluding additional revenue from tiered subscriptions, his team salary, merchandise sales, donations, Twitch cheer bit contributions, advertisements and sponsorships.

Electro-Voice RE20
Tweets by @stevensuptic