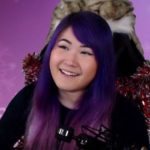 Taking selfies of her cat, snowboarding, exercising and travelling.

According to her autobiography: ‘When I was making my Twitch name, the name I usually use (“snowpeach”) was taken, so I wanted to keep “snow” and tried thinking of what I wanted to add on the end. I like the way light (moonlight, lamplight, sunlight) reflects off of freshly fallen snow, but I didn’t want to be called “snowlight.” So, I went with “snowlit” instead, on the idea that something is lit by the light reflecting off of snow.’

Snowlit’s introduction to video games was on a Super Nintendo when she was a child.

Snowlit started streaming in December 2014 after her boyfriend was watching one of her gameplays and encouraged her to try streaming it. Her channel grew quite quickly and by February 18, 2015 she had gained enough followers to receive full Twitch partnership. She decided to attempt a fulltime streaming career soon after that.

She has a long-term boyfriend and a cat named ‘Fayde’.

Snowlit is estimated to have ~4,000 subscribers, with an average viewership of ~135. This should generate her at least $10,000 USD per month, excluding additional income from merchandise sales, sponsorships, tiered subscriptions, tips, Twitch cheer bit donations, and advertisements.