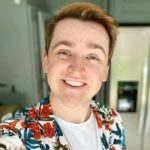 He has an older sister, as well as two half-sisters and a half-brother.

‘Major’ is actually his second name. People start calling him by both names while he was in school, as there were a number of other Scots in his class and they wanted to avoid confusion.

Smajor1995 has been playing video games ever since he received a Gameboy with Pokemon when he was little. During high school, he started watching YouTube videos from other gaming and IRL content creators and decided to try it out himself after a while.

After graduating from high school, he went on to attend university where he studied 3D computer animation. He also worked part-time in retail during that time.

He began creating YouTube content on various channels in 2012 while he was in his early teens, but later grew to dislike them and so move on to the next one. He began uploading IRL content to his current YouTube channel on July 20, 2013 and only started uploading gaming content to it in January 2014. His main motivation for doing so was the hope that he would be able to befriend other content creators.

According to his overlay, Smajor1995 has around 1,270 Twitch subscribers and averages over 2,000 viewers per stream. Therefore, he should be making an starting income of at least $4,445 USD per month, excluding additional revenue from tiered subscriptions, donations, Twitch cheer bit contributions, advertisements and sponsorships.

He streams several times a week

His favorite Hogwarts house is Ravenclaw and his favorite Harry Potter character is Luna Lovegood.