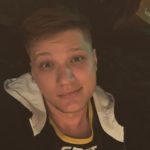 S1mple grew up playing Counter-Strike with his brother, who taught him how to play when he was four-years-old. He started playing Counter-Strike 1.6 with his neighbor when he was a teenager. They later started competing in LAN duo-tournaments together. He moved on to CS:GO in 2013 and was competing on various teams by sixteen. They continue to play games together to this day.

In 2014, he left his first team, LAN DODGERS to join Courage Gaming. Together, they won This led to his being invited to join Hell Raisers, so he switched teams. However, that same year he was issued a ban from playing for two years by ESL for cheating. When the ban ended in 2016, S1mple was approached by Team Liquid, whom he dropped out of university to join. He was with them for seven months but left to return to Ukraine because he missed his family. S1mple was soon approached by Na’Vi with an offer to replace Zeus in August 2016. He accepted and dropped out of his first year at university to pursue a pro-gaming career. He has been playing professionally ever since.

He is close to his parents and they show an interest in his career, even occasionally watching his streams and all of his tournament matches. He also has an older brother, with whom he shares a sushi restaurant business.

He doesn’t have a set schedule due to his team and business responsibilities.