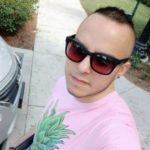 His parents are supportive of his career and he has a dog called Cosita Vizcarra.

ROOTCatZ’s uses the Peruvian nickname that his friends gave him. It is derived from his surname ‘Vizcarra,’ which they switched to ‘Vizcacha’ as a play on words. A vizchacha is a type of Peruvian rodent that is from the Chinchillidae family. From there, it was shortened to ‘catcha.’ One friend started calling him 'CatZ', pretending that he was confused as to how ROOTCatZ’s nickname was pronounced. Eventually, it caught on and everyone started calling him ‘CatZ.’ He's not really so into actual cats.

RootCatz and Drewby used to be duos partner in StarCraft: Brood War. They both started playing playing StarCraft II (SC2) during its open beta in 2010 and almost immediately decided to form their own North American team for the game.

Prior to focussing on a fulltime gaming career, he completed a Media Arts and Animation Bachelor degree at the Art Institute of Fort Lauderdale.

RootCatz started participating in professional gaming tournaments in 2010. It was also around that time that he started streaming on Justin.tv. This, combined with his skill, contributed to his being invited to the Justin.tv invitational in 2011 and he has been streaming and participating in professional tournaments ever since. However, he only started uploading videos to YouTube on November 15, 2011.

He and Drewby quickly gained skills in SC2 and began recruiting other skilled players for their new team. He moved to Root Gaming's house in South Florida in 2012 when they formed it and has remained in the US ever since.

In July 2018, he started working as a StarCraft 2 consultant for Blizzard.

ROOTCatz has dark-brown hair and olive-toned skin. He has dark brown hair that he keeps short and occasionally shaves into various styels. He also has a chin-curtain and wears different large, thin-rimmed rectangular glasses. He once shaved is hair into a short-mohawk style.

RootCatz is estimated to have ~350 subscribers. This should earn him at least $875 USD per month This is before he receives additional income from tiered subscriptions, tournaments winnings tips, Twitch cheer bit donations, advertisements and sponsorships. He has earned at least $14,000 USD across various tournaments, as well as $3,295 USD from his top nine donators alone.

He tries to avoid putting himself in dangerous circumstances, as he has thin blood which makes any injuries incredibly risky for him.