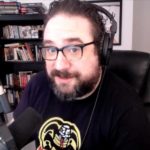 He originally went by ‘Gonzo,’ but decided to rebrand when he became a professional editor as he felt that it was childish.

RichardLewisReports grew up playing video games, with his favorite being Chaos by Julian Gullop. Then, when he was older, he participated in competitive Tekken 2, Counter-Strike: Source and Team Fortress 2 tournaments.

Other jobs he has held include sales management, coaching a women’s rugby team, and being a bouncer.

He started commentating and reporting on esports in 2004 for SoureJunkie after struggling to find work as a writer for the music industry and wanting to keep up his skills. He feels that he was fortunate as he could nominated for his first esports award in 2006. This was due to his being one of the first writers to compose articles about Counter-Strike: Source. In 2007, he got a job with Championship Gaming Series, but it only lasted for dix months. That put the breaks on his career for a bit, as he had to go get a job with the Birmingham City Council eMagazine. He eventually found a volunteer position for a website and also worked as a stand-up comedian at night.

After for struggling for a while, he considered going to America. Around that time, a player started a thread on Cadred (now Esports Heaven) for the website that he was working for to start paying him. It blew up overnight to have 100,000s of comments and the website gave in and agreed. This marked his first real foot in the door.

After that he became a features editor at Cadred for a while before landing a position as an editor-in-chief at Cadred. He worked there for many years. However, he feels that his career only really took off in 2014.

He started uploading content to YouTube in mid-2014 and he has been streaming on Twitch since November 2016.

He has been the editor-at-large for Dextero.com since September 2020.

According to Twitchstats, RichardLewisReports has around 3,600 subscribers and averages over 1,300 viewers. This would net him a base monthly income of at least $4,550 USD. This amount excludes additional income that he receives from tiered subscriptions, tips, Twitch cheer bit contributions, advertising, merchandise sales, sponsorships, his journalism salary and casting fees.