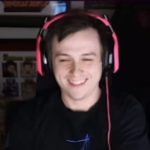 Working out and watching anime.

Rhabby_v was introduced to video games by is older brother in 1999. He and MyMisterFruit met in fifth grade when Rhabby_v’s family moved to that town and soon became best friends. They were soon spending much of their free time playing video games together. Not much has changed over the years. The two of them started playing Destiny during college as a way to spend time together.

At the beginning of March 2015, after six months of playing Destiny, MyMisterFruit suggested that they started recording their content to upload to YouTube. MyMisterFruit was already an established YouTuber by that point. MyMisterFruit invited his friend BlueWestlo to join them and recorded their first video that night. It immediately blew up and the soon had 350,000 views from it. They then continued recording a new ‘The Dream Team’ video very Tuesday to the Mr. Fruit YouTube channel and it has continued to grow.

According to Rhabby_v’s Twitch overlay, he has around 2,250 subscribers. This means that his base monthly income should be about $5,625 USD, excluding revenue from tiered subscribers, advertisements, sponsorships, Twitch cheer bit donations and tips.