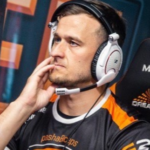 pashaBiceps and his wife have two children.

'biceps' is a nickname derived from his love of exercise and sports.

pashaBiceps began playing Counter-Strike 1.6 when he was about 13-years old, when an internet cafe finally opened in his tiny hometown. He hasn’t played any other video games beyond those in the franchise since then.

pashaBiceps first entered the competitive scene in 2009 when he competed in the European Nations Championships. It was there that he met fellow video gamers NEO and TaZ, with whom he formed the Frag eXecutors team. At the time, it was a huge risk, as the eSports scene wasn't developed yet. He and his teammates would often need to invest their own money into hotel rooms and transportation, with no guarantee that they would win the money back. At t first it was a struggle, but he continued to participate in professional tournaments until eSports and his stream had developed to the point where he could become a full-time professional video gamer player.

Although his wife had encouraged him to pursue his dream, it took a while until his parents and father-in-law came around. His father-in-law is now one of his biggest fans.

pashaBiceps has around 450 subscribers, with an average viewership of ~4,950. This would earn him at least $1,575 USD per month, excluding additional income from tiered subscribers, his team salary, sponsorships, Twitch cheer bit donations, tips and advertisements. His overall tournament winnings are estimated to be over $620,000 USD, and according to his Twitch autobiography, has received $63,459 USD from his top 12 donators alone.