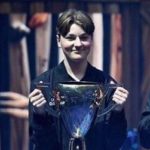 Nyhrox first started playing Fortnite in December 2017, when one of his friends encouraged him to try it out on his PlayStation.

Nyhrox plans to finish high school at public school before he pursues a fulltime career in gaming.

By September 2018, he had gained enough skills to place second in the Fortnite Polar Peak Monster event. This feat attracted the attention of professional esports organizations, enabling him to sign up with Cooler Esports the following month.

In July 2019, Nyhrox and AquaV2_ teamed up for duos and won $3 million USD to share in the 2019 Fortnite Duos World Championship. His entire family attended the event in order to show him their support. However, this support was only given once his father realized how much his son stood to win, was he willing to support Nyhrox in his career choice. This caused his Twitch following to skyrocket. However, the next month, he decided to leave Cooler Esports after Aquav2_ decided to team up with a new duos partner.

He has been a memebr of M10 Esports since Februrary 2020.