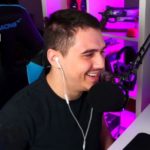 When he was growing up, Nikolarn parents decided to host playgroups and so he grew up with access to a wide variety of board games and video games. While he was in high school, he started watching justin.tv and later decided to try streaming himself when he heard that Amazon was planning to buy out Twitch. Another aspect that attracted him was the ability to interact with other like-minded people.

Prior to streaming fulltime, he completed his bachelor’s degree in Business Administration, Management and Operations from the University of Belgrade.

He started streaming Counter Strike: Global Offensive content on July 14, 2015 while he was in university. His channel quickly took off. However, he was still serious about completing his degree, so he decided to take a break during his final year so that he could focus on completing his degree and writing his thesis. He then returned to Twitch in May 2018.