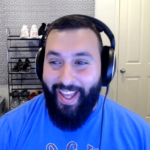 m0E is married with a daughter and a son. His younger brother is Lieth and they also have a sister.

It is an abbreviation of his name.

m0E started playing Counter-Strike in 2002 and started participating in tournaments in 2004.

m0E became a full-time Counter-Strike competitor in 2006 and started streaming some time later. He received his justin.tv partnership in October 2012. In the beginning of 2014, he started streaming for fun in his spare time. In June of that year, he decided to focus fully on streaming and quickly grew his channel. This growth inspired him to take a break from college in order to pursue a fulltime career in streaming and he hasn't returned since. He also dabbled in being an analyst and coach for a while in 2016.

m0E is estimated to have around 900 subscribers, with an average viewership of 710. Therefore, he should be earning at least $2,250 USD per month, excluding additional income from tournament winnings, sponsorships, tiered subscriptions, tips, Twitch cheer bit donations and advertisements. According to Esports Earnings, he has won over $57,600 USD from various tournaments.