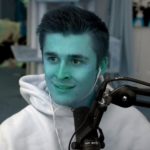 He has a sister and a cat.

Ludwig first realized that he loves entertaining others when he was in the 5th grade and presented a story to the class that went over well with them. This inspired him to join the drama club when he was in high school and he even performed in a few shows. During that time, he also started creating YouTube <em>Call of Duty</em> montage videos without telling anyone about it. However, he didn’t enjoy it, so he abandoned that first attempt after a while.

After high school, he attended Arizona State University as an English Literature and Journalism major. He applied to an acapella group and the two comedy clubs but didn’t get into any of them. So, when he received an offer to create a new comedy club with some of the others who also failed to make it into the comedy clubs, he decided to go for it. It took a few seasons, but it slowly started gathering a wider audience over time, so that by their final season, they had a regular weekly audience of over 100 people each week.

During this time, he also started playing Super Smash Bros. Melee, which is also how he discovered Twitch and started watching various streamers. Although he didn’t stream, he starting acting as a commentator at various local LAN tournaments in early 2015. As he got more opportunities and starting travelling to more tournaments, he began considering starting up his own channel as well. Theturning point came for him while he was participating in one of Slim_Machine’s Bad Melee podcasts and he decided to just start creating his own content. However, he stopped after a few attempts.

Prior to streaming fulltime, he was working at Best Buy.

After graduating college, he had a number of jobs, with his last being as the Head of Marketing for a vaping company. During that time, he started streaming in his spare time and spent a lot of time at work conceiving ideas for his channel.

However, he only really started streaming on Twitch on May 16, 2018. In February 2019, the company that he worked for began disbanding and he was one of the first to be let go.  As his Twitch channel was doing pretty well by then, he decided to go full time from then on. He has been occasionally uploading videos to YouTube since April 2015, but only began uploading consistently when he got into streaming. In November 2021, he signed a contract with YouTube and now streams exclusively on that platform.

According to his Twitch chat bot, Ludwig has over 21,300 subscribers. Has he regularly attracts over 7,000 viewers, this would put his base monthly income at $74,550 USD. This excludes any additional revenue that he receives from sponsorships, merchandise sales, donations, casting, Twitch cheer bit contributions and advertisements.

chat asks me anything but I HAVE to answer honestly link
Who is Ludwig? link
The Story of Ludwig link
Ludwig Stream Setup Tour link
The biggest announcement of my streaming career link
Ludwig's Twitch commands link

Focusrite Scarlett 2i2
Tweets by @ludwigahgren