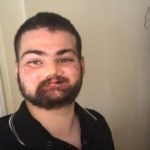 When he was younger, he used to play Disney’s Toontown Online and had an online friend called ‘Loopy’ who used to play with him. He named his new main character ‘Lo0p_’ after him.

Lo0p__ was born with a rare genetic disease called Hereditary Sensory Autonomic Neuropathy (HSAN) Type 5, which prevents him from experiencing most types of pain. This caused him a lot of inadvertent self-harm when he was very young, which lead to his damaged corneas and other semi-permanent injuries. Fortunately, he wasn’t bullied in school, and had quite a few friends. However, he did struggle with online abuse from in-game trolls who would make fun of his speech impediment.

He began playing console games when he was very young, with some of his favorite games including Crash Bandicoot on the Nintendo DS, Lego Star Wars: The Complete Saga and FIFA on his Nintendo Wii.

He started creating video content when he was ~nine years old when his mom gave him Windows Movie Maker as a present. He started out recording his gameplays of Club Penguin, RuneScape and other games. By the time he was fourteen, he had uploaded over 200 videos across several YouTube accounts.

Therefore, he simply created similar content when he began playing Counter-Strike 1.6 except that he used more advanced video-editing software. He was indirectly introduced to it by his cousin who had borrowed Lo0p_’s mom’s laptop to play it on at a friend’s house, and then left the game on the computer when he returned it. Lo0p_ discovered it when he was using his mom’s computer to do his correspondence coursework and soon fell in love with it. This was the first fps game that he had ever enjoyed, because he enjoyed the teamwork, accuracy and skill that it entails. He was in the sixth grade, living in Algeria for a year at the time.

It was only in 2015 when he began live-streaming on Twitch and to truly begin to commit to streaming seriously. It was then that he really started to attract a following on both of his channels. He initially began livestreaming because he loves interacting with others and found that Twitch helps him fill that interest.

After graduating from high school, he decided to focus on streaming fulltime, although he is studying some online courses. His parents are supportive of his career choice.