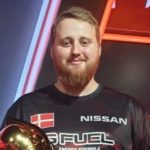 Larsen started uploading ARMA content to his YouTube channel in February 2016 before transitioning to King of the Hill and then Shattered Skies. He finally settled on PlayerUnknown’s Battlegrounds (PUBG) in April 2017.

He received Twitch partnership in September 2017 and went on to join Welcome to South Georgo (WTSG) under Team Kinguin’s PUBG in December 2017. He remained with them until September 2018, shortly after WTSG parted ways with Kinguin.

He then joined FaZe as their PUBG Analyst in June 2019 and remained with them until February 2020. His language isn’t appropriate for kids.