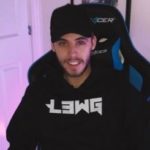 He has a dog called Prinny.

L3WG started streaming Fortnite on Twitch on November 7, 2019. After several failed applications, he finally made it into the partnership program on February 21, 2020. He joined Team Serenity’s pro-Valorant team in April 2020. However, he then joined Ghsot Gaming's stream team in June 2020.

According to his Twitch overlay, L3WG has around 1,050 subscribers. Therefore, his base income should be at least $2,625 USD per month. This is before considering the additional revenue he receives from tips, tiered subscriptions, Twitch cheer bit contributions, adverts, merchandise sales and sponsorships.