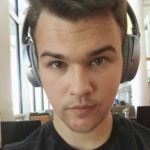 His parents divorced when he was young, so he was raised primarily by his mom, but visited his dad weekly. However, his parents later moved in together platonically, so he was able to spend more time with his dad. He also has an older brother.

However, while he did well in elementary school, his video gaming became obsessive in in high school, leading to his becoming socially ostracized with poor grades. When he was fourteen, he started playing Heroes of Newerth. At sixteen, he and his friends started competing in amateur tournaments and winning. He was soon approached to join a professional team, and he accepted.

In 2012, he joined Team Blackfade to compete in the Summer 2012 Dreamhack tournament in Sweden. His team came third, but it was the first time that he ad won a significant amount of money. His parents realized that he could actually make a living from gaming, and so supported him in his professional eSports aspirations. His mom often watched his streams.

In 2013, he moved to Miami with his stayGreen teammates to focus solely on the pro-scene. He has continued to change teams throughout the years, but still competes in tournaments. However, his main game has been DotA 2 since 2015 due to financial and competitive considerations.

KheZu has ~550 subscribers, which should minimally earn him a monthly income of $1,650
USD per month, excluding additional revenue sources, including advertising, sponsorships, tips, and tournament winnings.

While he doesn’t have a set schedule, he tends to stream several times a week for between 3 – 8.5 hours per session.