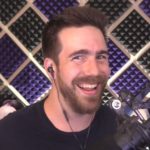 JonSandman and his wife have a son and daughter. He also has a sister.

When he was growing up, his friends nicknamed him ‘the Sandman’ for no reason. When he later got his Xbox One with Gears of War 1, he decided to integrate it as his username.

JonSandman started playing Rocket League as soon as it became available on Steam in July 2015. Prior to streaming, he studied film production in college. After graduation, he acted in a few B-movies before becoming the lead vocalist in a band for eight years.

In 2014, JonSandman was a moderator for an Arma 3 roleplay server. He was in charge of catching people who were either cheating or roleplaying poorly. He decided to start recording his interactions as evidence and after a while, community members suggested that he live stream his session so that they could watch him in action. He decided to try it out and began streaming on Twitch in June 2014.

His channel grew so quickly that he was able to become a fulltime streamer by August 2014. It was a difficult decision for him, because he was still working as a server at a Chili's Grill & Bar between gigs at the time. However, his viewers were encouraging him to stream fulltime by tipping him a shit’s-worth of money to stay online instead of going to work. He would then take of that day, and the pattern continued until he was fired from work. He then decided to attempt fulltime.

Although his channel is upbeat, his language isn’t always clean.

JonSandman has ~4,800 subscribers, which should earn him a monthly minimum income of ~$12,000 USD, before additional revenue from sources such as tiered subscriptions, merchandise sales, tips, sponsorships, advertisements, Twitch cheer bit contributions and others.

His favorite game is Gears of War 1.

You have to go into Twitch and streaming, you have to go into both of those platforms loving it. You have to love playing video games, love making content, love vlogging, love showing off apparel, love doing what you do first; and then the money comes later.