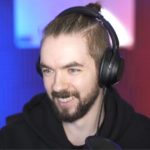 He has two older brothers, two older sisters and a nephew.

His mom used to call him Jack when he was a kid, and one of his classmate’s started calling him that as well. One day, he injured his eye during a football match and the wound got infected a couple of weeks later. So, the same classmate started calling him ‘Jacksepticeye,’ and he decided to adopt it as his handle.

Jacksepticeye started playing video games when he was somewhere between five and seven years old, but his siblings weren't as interested in them as he was, so he usually just played them with his friends. His first video game device was the original GameBoy with the Pokemon Blue game. When he was seven, his parents bought him a PlayStation, on which he would usually play Final Fantasy 9 and Tomb Raider 2 on. Aside from playing video games, he would also play outside and climb trees.

His parents moved their family from the city to a cabin in the woods to be near his grandmother when he was in his late teens. He only got internet in his home in 2017, so before that, he primarily played games on his PlayStation when he was in high school.

After high school, he studied Sound Design in college during his second year, although he didn’t finish his degree as all he really cared about were video games. However, he didn't really have anyone to hang out with with his new found free time, and got lonely. he therefore spent a lot more time browsing internet forums and chat groups. He met his Korean girl friend through these forums, and so he visited her in Korea.

He then returned to Ireland with the plan to complete his degree and then return to Korea o live with his girlfriend while teaching English there. Soon after returning to college to study Hotel Management, he bought his first gaming PC and started watching YouTube commentary and gameplay videos.

He thought that YouTube videos looked like fun, and so started uploading YouTube videos as a hobby in November 2012. He was also inspired because he was going through a rough patch at the time and felt very alone, so he wanted to create a space where people could talk to each other. His original videos were impressions, but he decided to switch to gaming videos in order to share his passion with others. After winning PewDiePie's shoutout competition, his subscriber count skyrocketed to 16,000, which spurred him to create even more content.

At first, he only attracted under ten views per video, but as he began to really become passionate about it in March 2013, he started putting between 9 – 12 hours a day into producing content. It was only after around a year and a half that his content started attracting hundreds of views his big break came when one of his Far Cry 3 wingsuit videos attracted over 100,000 views.

He decided to finish his degree despite his disinterest before he went on to dedicate himself completely to content creation in May 2014. He occasionally streams with PewDiePie and Markiplier, alongside whom he is a co-owner of the 'Cloak' clothing brand.

According to TwitchStat's, jacksepticeye has over 8,250 subscribers to Twich alone.  With the crazy number of viewers that he attracts, this would net him a base monthly income of at least $28,875 USD. This amount excludes additional income that he receives from tiered subscriptions, tips, Twitch cheer bit contributions, advertising, and sponsorships.