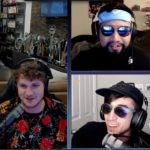 Blake and his wife have been married since 2016 and have a dog and Jorge has 7 siblings.

The Team Summertime trio have been friends since their early high school days. They met on their high school’s soccer team, realized their mutual love of gaming and started playing Call of Duty together in their spare time in 2009.  The then moved on to other games as well, such as Halo: Reach, Super Smash Bros. and Mario Kart, among others. During high school, Blake got into watching montages and guides on YouTube in order to improve his own gameplays.

Prior to full time, Jorge worked a variety of jobs including working as a Food Lion stocker, dishwasher, warehouse material handler and hoist operator.

Blake also works as a wedding and lifestyle photographer.

Hitch was the first member of Team Summertime to get into content creation, as he and another friend of his first set up a gaming YouTube channel called Everything Game base (EverythingGbs) in August 2012. In late 2012, he attended a UGM Event in Philadelphia, where he worked together with the organizers to create a presentation of the event. He did so well that he was invited to work for UGM on their official channel. From there, he began hosting events for them, which lead to further work with other organizations later on.

This led to collaborative podcasts with other content creators. He also became more serious about producing consistent content on his solo YouTube channel that he had been sporadically uploading content to since March 2012. He began streaming on Twitch in June 2015 and then began collaborating with OpTic Gaming’s stream team in 2015. He became an official member in May 2016 and remained with them until August 30, 2019.

Officially, Hitchariide is Davis’s streaming channel, but it often features a joint stream with all of the TST members. The other two members were able to go full time in October 2018 after receiving a sponsorship from Elgato. The three of them then joined NRG Esports in October 2019.

JorgeSummertime started streaming on his own Twitch channel when Hitchariide left OpTic, whereas BlakeCissel had already started in July 2016. They uploaded their first YouTube video on their Team Summertime channel in August 2019.