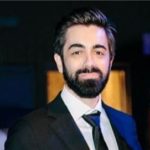 He has two cats and a dog.

Prior to streaming, he had a fulltime job as a Bug Builder. In late 2013, he became obsessed with Counter-Strike: Global Offensive (CS:GO) and even bought himself a new PC to enhance his gameplay. He quickly improved his skills and gained high rankings to the point where he had even considered creating his own CS:GO  professional team. However, he was offered a spot on MouseSpaz in late 2014 and joined them instead.

MouseSpaz performed really well that season and Hazed soon received offers from more establish teams. He continued to participate as a pro-player until April 2017, when he decided to adopt a coaching role for OpTic Gaming instead. He currently coaches for Mythic. In November 2021, he joined NRG Esports' Valorant roster.

According to his Nightbot, Hazed as ~403 people subscribed to his channel. This would earn him a monthly income of at least $1,000 USD per month, excluding additional income from tiered subscriptions, his team salary, tips, Twitch cheer bit donations, sponsorships, and advertisements.

He doesn’t have a set schedule due to his professional commitments, but he tends to stream a few days per week for between 3 – 9 hours per sessions.