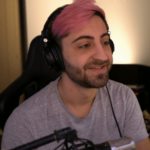 Back in 2004, he was going by 'PhinoxFire,' (The spelling was due to his not knowing how to spell 'phoenix.' In 2004/2005, he started playing Habbo Hotel as a Radio DJ and decided to change his name to then changed it to 'PhinoxAce.' He met a friend in the game who went by 'GiantEgg.' In 2005, he moved on to World of Warcraft when one of his friends told him about it and GiantWaffle was able ot convince his dad to pay the monthly subscirption in exchange for mowing the lawn every week. He then named one of his characters GinatEgg in-game in order to save it incase his friend ever decided to join him, but he never did. So, he eventually started using the character himself so as to level it up in the hopes of attracting hsi friend to the game that way. but, that didn't work either.

He therefore decided to create a new character, as he wasn't having much fun with that mage, and decided to go with variations of 'Giant[food name].' he eventilly settled on Giant Waffle, when that became his main WoW character. He chose waffles on the day of that character's creation, because that is what his mom made him for breakfast that day.

Giantwaffle grew up playing video games, although the first one that he really got into was Tony Hawk's Underground.

He dropped out of college during his senior year of Electrical Engineering in 2014 after he started making enough money to cover his expenses and realized that it might have the potential to become a fulltime career, especially as he was making more money through streaming than he would from an entry-level position straight out of college.

GiantWaffle started streaming StarCraft and then Minecraft on Twitch in 2011 after watching Day9TV's streams and being inspired to create his own content. After a few years, he lost interest in Minecraft, he decided to branch into variety. This transition was difficult, as he had to rebuild his brand as a result.

He then met Lirik in Towelliee's chat in 2011, where they would occassionally chat to each other. He saw Lirik occassionally announcing his own stream when Towelliee was offline and people would go to watch him. When DayZ released in 2012, he started stream-sniping Lirik, which is how they became properly acquainted. They were soon playing together until GiantWaffle got bored and decided to return to Minecraft. However, the friendship had been forged and the two will still team up occassionally when they happen to be playing the same game again.

It was also arond that time that he met Shortyyguy, as he also decided to stream snipe Lirik. The three of them started to occasionally stream at night after their official schedules, with various random and old co-op games. GiantWaffle then received Twitch partnership on May 30, 2013.

GiantWaffle is estimated to have around 4,950 subscribers. This would earn him between $12,375 - $17,325 USD per month, excluding sponsorships, advertising and tip revenue.

On December 1, 2018 he broke the world record for the ‘Most Hours Streamed In 30 Consecutive Days by a Single Streamer’ with 464 Hours and 29 Minutes.

GiantWaffle grew his beard as part of a donation drive for PAX in 2014 and decided to keep it.