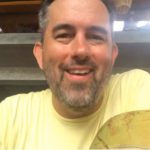 He and his wife have been married since November 1999.

Generikb’s first PC game was most likely either Raid of Fort Knox, which was released in 1981, or a text-based adventure game on the Commodore Vic-20. His mom used to help him with the text games, since he was still quite young at the time. He also played video games on his Atari 2600, followed by an array of other systems.

He has been playing a wide variety of video games ever since. Outside of video-gaming, he enjoyed rollerblading and bike-riding in his spare time while he was growing up.

He started playing Minecraft in 2011 and it remains one of his all-time favorite games. One day, while he was playing together with some of his friends, he was struggling t figure out how to make water flow for longer than eight blocks, and so turned to the internet for help. He discovered EthosLab’s YouTube content and learned about many new elements that he hadn’t even known were possible within the game. This aspect of educating others about the game that they may not otherwise have been aware of appealed to him, and so he decided to attempt to create his own content.

After high school, he studied Electrical Engineering in college and then went on to work in a variety of IT-related fields, with his last job being a web analyst, which he worked as for a number of years before venturing into fulltime content creation.

He began uploading Minecraft content to YouTube on August 1, 2011 and slowly grew his channel by producing consistent content. It started out as a hobby for him, and it was only after six months of content creation that he began monetizing his channel. For a long time though, he was focused more on the enjoyment that he derived from content creation than from the hope of turning it into a living. His goals gradually changed as his channel continued to grow.

In early 2014, he decided to branch out into other video games and has remained a variety streamer since then. That was also around the time that he transitioned to becoming a fulltime content creator.

By the time he decided to start streaming on Twitch in May 2018, he had reached 1 million subscribers on his YouTube channel and it has since become his main medium. This decision was largely due to his dissatisfaction with the way in which YouTube had changed its operations, making it harder for him to monetize his content on their platform.

According to his Twitch overlay, Generikb has ~1,820 subscribers and tends to attract over 200 viewers per stream. Therefore, he should be earning at least $4,550 USD per month. This excludes further income that he may receive from tiered subscriptions, sponsorships, merchandise sales Twitch cheer bit contributions, advertisements and tips.

One of the keys [to being successful] is by not focusing on the growth nd the money and stuff. Just focus on being entertaining.