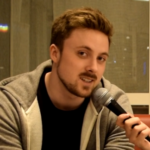 He married @Nani in November 2015 and they have a dog.

His handle is a combination of his surname and initials.

Forsen initially participated in StarCraft 2 while he was in college. However, he came to realize that in order to compete on the international scene, he would have to dedicate at least 12-hours a day to practicing. This wasn’t possible at the time, as he was still in university. He therefore switched to streaming other content, until he eventually joined Hearthstone. in March 2017, he joined Cloud9.

He has short, dark-brown hair that he fluffs into a peak. He keeps his beard short.

Forsen has ~9,010 subscribers, with an average viewership of ~12,450. This should generate him a minimal monthly income of $31,535 USD per month. This is before taking into account additional income that he receives from his team salary, sponsorships, tiered subscriptions, tips, Twitch cheer bit donations, and advertisements.