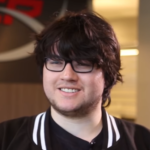 When he was in high school, he wanted to make a girl that he liked laugh by using the handle ‘sirdiesalot’ in Maplestory. This name transformed into ‘Dyrus’ when he started playing Counter-Strike.

Dyrus has been playing video games since childhood, although he also participated in karate and baseball while he was growing up. As a teenager, he played a variety of video games, including World of Warcraft, DotA and Warcraft II & III. After high school, Dyrus worked for his father's plumbing business. However, it wasn’t working out and his father fired him in 2011. Around that time, he joined Epik Gamer and began participating in tournaments with them. His popularity increased as they gained more exposure and higher rankings.

Dyrus started uploading content to his YouTube channel in 2011. In 2012, he received an offer to move to the TSM house, even though he was not part of their team and did so. Soon afterwards, there was an opening in TSM’s lineup and Gosu joined switched to TSM. That was when he decided to focus on streaming and competing as a full-time profession. He retired from professional LoL tournament play in October 2015, although he has participated in a couple of events since then. He continues to stream various games and IRL content on his channels.