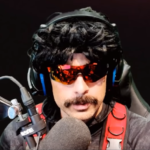 His name and persona was conceived with the help of his teammates when they originally began streaming. He created his character as a satire of the extreme, macho depiction of gamers that people sometimes had of gamers.

DrDisRespect first started gaming at age five, when started playing Pitfall on the Atari 2600. He then moved on to other games and other types of controllers. When he was around 12 years old, he participated in his first gaming tournament, the 1994 Blockbuster Video Game Championships in Vallejo, CA and won. He continued gaming throughout his childhood and adulthood.

He initially opened a YouTube account together with his roommates in January 2010, mainly featuring skit videos and Call of Duty gameplays. He took a four-year hiatus from streaming in 2011, as he became more focused on his career as a Map Designer and Community Manager at Sledgehammer Games. DrDisRespect continued gaming during this time, although he did set up a Justin.TV account in 2015 while he was still working there. However, at the time, he didn’t stream, but rather used his account to watch video game streams for free.

In September 2015, DrDisRespect quit his job at Sledgehammer, and took up full-time streaming due to his wife’s encouraging him to pursue his passion over accepting a definite job opportunity that had come up during that time.

On June 26, 2020 he was permabanned on Twitch for as yet unknown reasons. On August 7, 2020 he began livestreaming on YouTube instead to a viewership of around 510,000 people and confirmed that Twitch has yet to reveal the reason behind the ban. He now streams on YouTube Gaming.

DrDisRespect has ~34,520 subscribers to his Twitch channel, with an average of 78,000 viewers. This would generate him a base monthly income of $273,000 USD. This excludes additional income from sources such as tiered subscriptions, tips, advertising revenue, Twitch cheer bit donations, sponsorships and merchandise sales.

His stream times can vary from week to week and are updated on his Twitch and Twitter profiles. He streams from Mondays – Fridays for 8+ hours per stream.