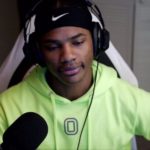 Playing and watching basketball and going to the gym.

He has a couple of brothers, a sister and two children.

His nickname came about when he was playing basketball as a freshman in high school. He used to say it every time he scored a shot. People heard it and began calling him by it.

Draineo grew up with many of his friends being gang members, although he never joined one himself. He had played basketball casually when he was younger, but he only really became serious about it during high school. He also discovered video games during that time. His first battle royale was H1Z1.

After high school, he attended and graduated from college.

Draineo started creating YouTube content in late 2014 when he was under house arrest for nine months and didn’t know what else to do with his time. He watched YouTube videos to fill the time and was inspired to try it out himself. During that time, he fell in love with streaming and really began taking it seriously during his last two months on probation. His channel grew quickly, and he made it into his main focus.

Aside from video game gameplay, he also likes to record the acts of kindness that he does for the poor and homeless in his community, as well as his IRL basketball matches.

He was partnered with Twitch on August 17, 2018. He stopped streaming and creating content in July 2021.

Draineo is estimated to have ~450 subscribers. As he usually attracts of 1,400 viewers per streams, this should generate him at least $1,575 USD per month. This excludes additional income from sponsorships, tiered subscriptions, tips, Twitch cheer bit donations, and advertisements.