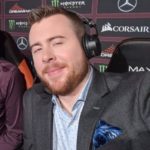 He has four brothers, a sister and a cat named Moon.

When he was in high school, he and one of his friends had very different poilitcal views and would often argue about them. One day, this friend changed his ingame name to ‘TheCommunist,’ so he decided to change his to ‘TheCapitalist’ and has been using it ever since.

DotACapitalist grew up listening to sports commentators and playing video games, especially as he moved around a lot after his parents divorced.  He started playing (Defense of the Ancients) DotA in 2004 and felt really connected to it due to the friendships that he developed through it.

After high school, he decided to attend a community college for his first two years of school before transferring to another university in order to avoid incurring unnecessary debt. However, after the first year, he still hadn’t figured out what field he wanted to go into, so he chose to take a break from college to join the Marine Corp reserves instead in June 2009.

Prior jobs that he has held include working as a Photographer's Assistant, a Sales Associate at Lowe's Outdoor Garden and as a Shiploader at an Industrial Paper Plant.

In his spare time in early 2011, DotACapitalist started casting Heroes of Newerth and DotA 1 matches after one of his friends asked him to come host with him online for a site called GamePlays. Over the next couple of years, he gained slowly gained recognition in those communities. His big break came when he started casting with TobiWan, who showed him a lot of patience and helped him to progress beyond pay-by-plays into full casting.

In early, while he was still with the Marines, he received an opportunity from TobiWan to become a Dota 2 caster for Freaks 4U in Berlin and so applied for an early discharge. He realized that he was taking a risk when he went to pursue this position but decided to go for it anyway. Fortunately for him, they granted him his request in November 2013.

He stopped streaming in mid-2021 to focus on his casting and voice-acting careers instead.

Although he doesn’t have a set schedule, he tends to stream several times per week for between 7 – 12 hours per session.