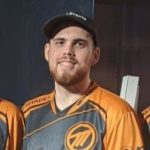 Deepshades first started playing World of Warcraft (WoW) casually during the Wrath of the Lich King expansion. He joined his first guild when he was fourteen years old during the beginning of the Mists of Pandaria expansion. Since then, he has also been part of Genuine, Envy, Rapid Eye Movement and Serenity.

After a few years of raiding, he briefly joined Method in 2015 before transferring to Serenity in 2016. He remained until he returned to Method in May 2017. Deepshades then went on to accomplish his first ever world first kill with them, by defeating Kil’jaeden in the Tomb of Sargeras in July 2017. They have since gone on to achieve a few more.

He left Method when the team disbanded in 2020 and then joined the ex-team members new guild, Echo, when it was formed in July 2020.