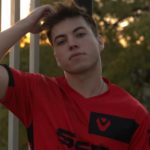 dapr first started competing in the professional CS:GO circuit in 2016 and joined a number of teams over the course of his career. However, he decided to retire from CS:GO in May 13, 2020 after his team, The Bad Luck Bears, disbanded. He then moved on to Valorant and joined The Sentinels pro-Valorant team in June 2020.

According to his Twitch chat bot, dapr has around 200 subscribers, which should earn him an income of at least $550 USD per month, excluding additional revenue from tiered subscriptions, his team salary, donations, Twitch cheer bit contributions, advertisements, sponsorships and tournament winnings. According to EsportsEarnings, he has won over $72,000 USD from various tournaments.