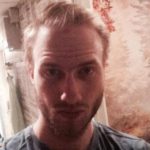 Very little is known about him.

Dakkroth originally started streaming on own3d.tv in mid-2012 and then switch to Twitch in November that year.

He joined Fade2Karma’s World of Warcraft roster in November 2018. He remained with them until June 2021.