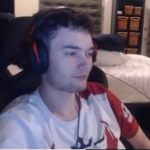 It’s a contraction of his name and surname.

Dafran grew up playing video games with his friends. In his teens, he started playing Counter-Strike 1.5 and became involved in Clan Wars.

He became friends with other Danish players and they decided to form a competitive team. They decided to attempt a career in Counter-Strike 1.6, with his parents giving him a one-year trial to accomplish his goal. Unfortunately, they weren’t successful.

In 2009, he moved on to Overwatch as soon as it released. There, he was better able to reach the higher skill-tiers, as everyone were newcomers to the game. He made another attempt at professional e-sports and succeed. He retired from professional Overwatch in March 2019. He went on to stream full time as part of Atlanta Reign, but then announced his retirement from full time streaming in June 2020. He still continues to stream occasionally. Later that month, he announced that he would be going into farming, and started streaming his farming updates on his channel instead. However, in 2021, he got back into streaming video gaming content.

According to his Nightbot, Dafran has ~6,260 subscribers, which would minimally earn him ~$15,650 USD per month, excluding additional revenue from tips, Twitch cheer bit contributions, tournament winnings, sponsorships and advertising. According to his Twitch autobiography, he has earned over $61,697 USD from his top 20 donators alone.