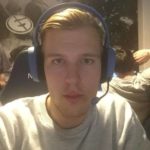 Cr1tDora has been part of the Dota 2 pro scene since 2012. He went through many teams over the next four years, until joining Evil Geniuses as their Dota 2 team captain in October 2016. However, after The International 2017 he decided to step down as captain and to rather focus on Support. He continues to represent them till this day.

He doesn’t have a consistent schedule.

Cr1tDota’s birthday link
The final call: Cr1t steps up to the captain's plate link
Cr1t- TI8 Interview: “We were in a place on the team where everyone shifted the blame on somebody else.” link