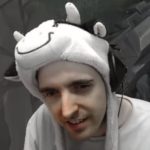 According to his Nightbot, ‘Cowsep = Cows + Joseph (Korean Joseph is pronounced Josep).’

As a teenager, Cowsep played Grand Chase and well as many other games. He discovered League of Legends in December 2009 and instantly fell in love with the game. Although he originally mained Shaco, his favorite champion soon became Master Yi, as he loves that the character is able to reach its maximum attack speed quickly as well as the fact that he doesn’t require much support from teammates.

After graduating from university with a degree in Communication Studies in 2012, Cowsep decided to move to South Korea to teach English to middle schoolers. He did so because he wanted to try something new and challenging.

After two years of living in Korea, Cowsep decided to start streaming part time while he was still in Platinum Rank. He started out wearing a cow costume based on his gamertag but wasn’t sure whether he would be sticking with it or not. However, as people liked the gimmick, he has continued to wear it throughout his career.

By April 2014 he was already partnered with Twitch. His channel continued its rapid growth so that he was able to quit his job to focus on fulltime streaming in 2015. Although he often visits the US to attend Twitch con and other conventions, he still lives in Korea.

His channel his not kid friendly.

Cowsep has ~2,400 subscribers. This should minimally earn him a monthly income of $6,000 USD per month, excluding additional income from tiered subscriptions, tips, sponsorships, Twitch cheer bit contributions, and advertisements,