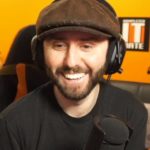 He and his wife have a couple of kids.

CompletedItMate grew up playing on a variety of gaming consoles, including the Nintendo 64, Mega Drive the 2600 Atari 2 and others. In fact, many of his earliest memories involving him playing video games.

Outside of gaming, he grew up with an obsession for films and television. As he was an only child for many of his younger years, he also learned to use his imagination. As he grew older, he enjoyed being able to act out being interesting people doing interesting things and wanted to make a career out of it when he grew up.

He was ‘Jay Cartwright’ on Inbetweeners and continues to do voice-over work and to appear in television shows.

He uploaded his first YouTube video on April 24, 2016. He just did it for fun, as he is still a professional actor. His main motivations were to learn more about filming, directing, editing, and creating content. He then started streaming occasionally on Twitch in May 2016.

According to his Twitch overlay, CompletedItMate has around 1,150 subscribers. This means he should be making at least $4,025 USD each month. This is before taking into account his earnings from tiered subscriptions, tips, cameo, Twitch cheer bit contributions, advertisements, merchandise sales and sponsorships.

Oasis is his favorite band.