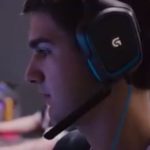 According to his chat bot, ‘Ciz was in an xbox clan called izlucky, the first letter of his name is C = CizLucky cizBot.’

CizLucky has been playing video games since he was eight years old, starting with Super Smash Bros. Melee. He continued playing various titles while he was growing up, including Smite, Counter-Strike: Global Offensive (CS:GO), Overwatch, PlayerUnknown’s, World of Warcraft (WoW) and Underground.

He was introduced to Fortnite by is college roommates in December 2017 when he was in his freshman year. They soon became addicted to it and were often playing it together in their spare time.

In 2019, he began entering admission free tournaments in the hopes of qualifying for the Fortnite World Cup. This attracted the attention of Tempo Storm, who signed him on as part of their Fortnite team along with his duo partner Brush in April 2019. Two weeks later, they successfully qualified for the world cup. After placing 36th and winning $50,000 USD in the world cup, he decided to take a break college in order to focus fully on his pro-career. This was a risk for him as he had to forgo his scholarships in the process.

CizLucky chose to leave the organization in March 2020. Since then, he has continued to compete with his friends, but he now only streams occasionally.

Although he trains for around ten hours each day, he doesn’t stream most of it.