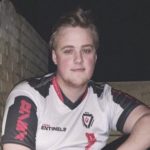 He got it online from a name generator.

Carose played various fps and PVP games while he was in high school, including CS:GO, World of Warcraft: Arena and Overwatch, started playing Fortnite soon after it released and has been grinding it competitively ever since.

He started streaming on Twitch in February 18 and was signed on as part of Sentinel’s Fortnite team in July 2018 upon graduating from high school. In May 2020, he decided to switch to maining Valorant.

He tends to stream for at least two hours a day.