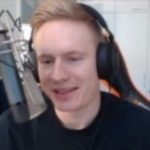 Playing and watching football and working out.

According to his Twitch autobiography, ‘It originates from my last name, Brock. When I created the name, I wanted something close to my real name and at first thought of ‘Brox’ but ended up adding ‘-ah’ onto it.’

Broxah’a favorite game was Pokémon: Ruby when he was a child. He continued to play games casually while he was in his teens, and also spent a lot of his free time playing football and watching Liverpool’s matches.

He started playing League of Legends soon after it released, but only reached Challenger during Season 4. It took him another two years of maintaining his Challenger position before he considered the possibility of going pro. He was completing his final year of high school when he approached his parents in 2016. They agreed to support him with whatever he wanted to do after school on condition that he achieve good grades at the end of the year. His parents have continued to support him ever since.

Upon graduating high schoolin 2016, he decided to give himself a year to achieve his goals and spent a couple of months consistently grinding on Solo Queue in the hopes of getting noticed. Fortunately for him, his online friend Nico then approached him with the opportunity to join a new team that he was forming under Fnatic. After being part of their Academy team as a jungler for a few months, he was promoted to their main roster in February 2017. He remained there until November 2019, when he moved to Team Liquid. According to Esports Earnings, he has won ~$280,000 USD from various tournaments.

Broxah has ~600 and usually attracts over 2,500 viewers per stream. This means that he should be earning at least $2,100 USD per month. This excludes additional income from sponsorships, tournament winnings, tiered subscriptions, tips, his team salary, Twitch cheer bit donations, and advertisements.

Random due to his professional commitments.

Broxah | Ask Me Anything! (Twitter Q&A) link
Caps and Broxah Double-Interview: "If there ever was a time for EU to shine at Worlds, it's now link
Broxah Graduates From Fnatic Academy link
Broxah’s Tournament Winnings link
Broxah’s Twitch Subscriber Statistics link