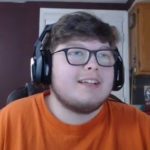 Aydan lived with his parents until he moved to California in February 2019 and has a good relationship with them. He has an Australian Shepherd called Bambi.

he competed in a few Call of Duty tournaments while he was in high school and he has always preferred console to PC. This is despite his having commented that this does negatively impact his Fortnite gameplay, as PC players are able to edit at a faster rate than console players.

Aydan started streaming in mid-2017, as soon as he completed high school. His parents were supportive of his decision, but did stipulate that he only had two years to try to make it work, or he would need to either find a job or move on to college.

Although he did manage to accumulate a few viewers, but once Fortnite came out, he began playing wagers and he began to be known and hosted by bigger streamers. When he had reached an average viewership of 150 -200 views, he was able to get into Ghost Gaming. From around then, he started participating in Fortnite’s Skirmishes. There, he managed to defeat Nickmercs, which gained him greater recognition to the point that he was able to commit to streaming full-time.

According to his Twitch chat bot, Aydan has over 2,850 subscribers, which should earn him around $9,975 USD per month. This excludes income from sponsorships, tournament winnings, Twitch cheer bit donations, advertisements and tips. EsportsEarnings puts his total tournament winnings at over $180,000 USD.

Aydan doesn’t have a set schedule, but he tends to stream almost daily for between 3- 13 hours.

He has the world record for 30 kills in solo on console in Fortnite.