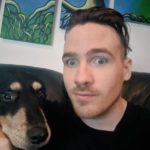 After high school, he went on to study at the University of Alaska Anchorage. After that, he worked in a variety of different positions, including writing, stand-up comedian, a few executive chef positions and even a head chef for an oil company.

While he was working at the oil company, he enjoyed watching Twitch in his free time because there wasn’t really much else for him to do up there. At the time, he was mainly watching Z-lady, MANvsGAME and Trev_elyan, among others. After six months, he decided that he also wanted to attempt to create a channel where people could hang out and feel less alone.

He started streaming on Twitch in August 2014 and grew quickly enough to be partnered by October 5, 2014.

He and his wife have been married since September 2019 and they have two dogs, Chappy and Laika. He also has a niece. His parents are supportive of his career.

According to TwitchStats, AlaskanSavage has around 1,400 subscribers. This should earn him at least $3,500 USD per month, excluding additional revenue from other sources such as tips, tiered subscriptions, sponsorships, Twitch cheer bit donations, and merchandise sales.