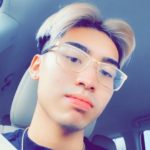 He named himself in homage to NFL star, Nelson Agholor.

Agholor grew up playing Madden NFL before moving on to Call of Duty: Black Ops III. His first NBA 2K game was NBA 2K16. He fell in love with it and eventually decided to start grinding to Legend with the release of NBA 2K17. He went straight into fulltime content creation upon graduating from high school.

He currently lives in Fairfax, VA.

He originally started streaming NBA 2K17 on Twitch in November 2016 soon after he began attempting his grind to Legend. He then began uploading content to his YouTube channel in January 2017. He transitioned to maining Fortnite content in February 2018.

His favorite football team is the Philadelphia Eagles and his favorite NBA player is Damian Lillard.