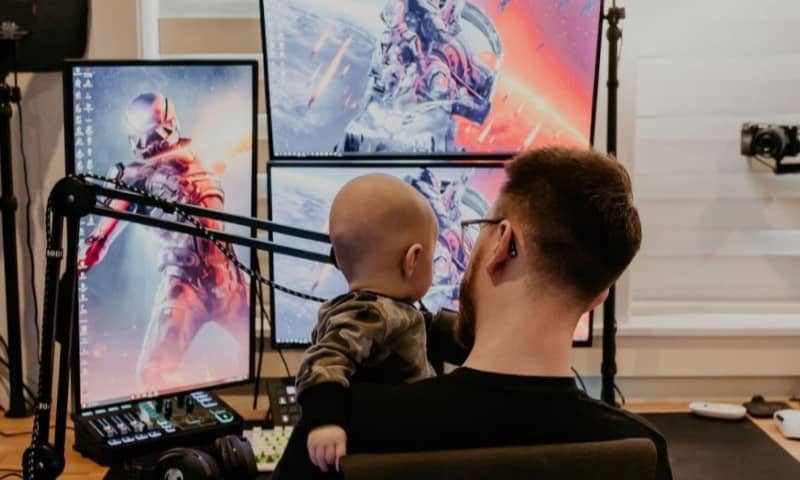 GoldGlove is an OG streamer who has been creating content since 2010. He has since established a loyal fanbase to his variety streams largely due to his consistency, co-streams, love of games and chat engagement. Below, we have provided an overview of the equipment that has been included in GoldGlove’s gaming setup in case you are interested in discovering how he optimizes his skills and production quality.

WHAT MONITOR DOES GOLDGLOVE USE? 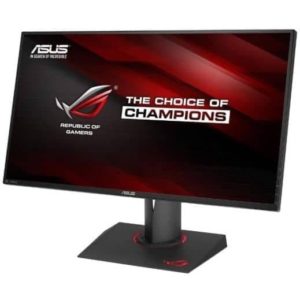 GoldGlove uses an ASUS ROG PG279Q monitor. The ASUS ROG Swift PG279Q is an award-winning 27″ gaming monitor that offers a maximum resolution of 2560x1440p at a response time of 4ms(grey-to-grey.) It is capable of refreshing at a rate of up to 165Hz and has allows for maximum brightness of 350cd/㎡. It integrates both NVIDIA G Sync technology to reduce lagging, tearing, and stuttering, and ASUS’ Eye Care Technology to reduce eyestrain by providing the GoldGlove with four different blue light settings. Its stand allows adjustability options of tilting 20° to -5°, swiveling 60° to -60° and pivoting 90°, in addition to its height being increasable by up to 12cm (0.73″.)

WHAT MOUSE DOES GOLDGLOVE USE? 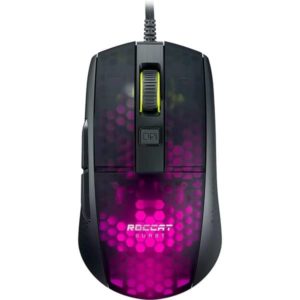 GoldGlove uses a ROCCAT Burst Pro mouse. The ROCCAT Burst Pro is a wired gaming mouse. It is fitted with a ROCCAT Optical Owl-Eye Sensor that is based on the PixArt PMW3389. It offers a range of 50-16,000 DPI with the possibility of storing up to five DPI profiles onboard the mouse, with the option to set them in increments of 50. The preset options are 400, 800, 1200, 1600, and 3200 DPI. It has a maximum tracking speed of 400 IPS at a maximum acceleration of 50G. Its heat-treated put PTFE feet further help with accuracy by ensuring smooth movement over most surfaces.

Its shell has a translucent honeycomb design that brings it to a light weight of 68g (6.4oz) while still protecting its contents from being clogged with dust. Despite its symmetrical shape, it is better suited for right-handed users, as there are only side buttons on the right thumb side. The other buttons comprise of the clickers, the DPI button beneath the scroll wheel and three on the scroll wheel. It can store up to five macro profiles. These, as well as its RGB backlighting can be set through the ROCCAT Swarm software. Its software is compatible with Windows 7 or later.

WHAT KEYBOARD DOES GOLDGLOVE USE? 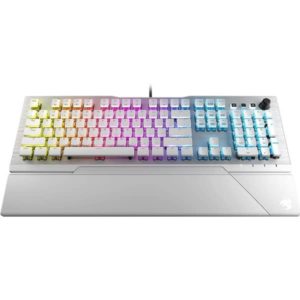 GoldGlove uses a ROCCAT Vulcan 122 AIMO keyboard. The ROCCAT Vulcan 122 AIMO is a wired gaming keyboard that has a sturdy construction. It is only available with Titan Brown tactile switches. The have an actuation point of 1.8mm and have a total travel distance of 3.6mm. They are soldered on to the anodized aluminum top plate and have a dust-resistant design. They are then topped with removable ABS keycaps.

It has a low-profile design with dimensions of 23.5 x 46.2 x 3.2cm (9.25 x 18.19 x 1.26″.) This is meant to reduce fatigue over long-term use. It also has lock-tight rubberized feet on its underside to keep it from moving during use. There are dedicated volume controls in the top right corner, and the navigation keys can be set with macro profiles as a double-function, thus allowing for up to 6 macro profiles to be stored onboard. These, as well as the per-key RGB Aimo lighting can be set through the ROCCAT Swarm software. The keys are also fully-remappable.

WHAT HEADSET DOES GOLDGLOVE USE? 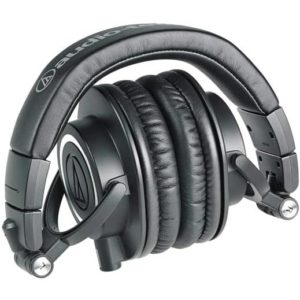 GoldGlove uses Audio-Technica ATH-M50x headphones. GoldGlove’s gaming setup includes the Bluetooth version of these wired, dynamic headphones. They are constructed from a lightweight plastic and have closed-backed earcups with an over-ear fit that are 90° rotatable in both directions. They also have a collapsible headband. Both the headband and earcups’ padding are covered in a leatherette fabric.

WHAT MICROPHONE DOES GOLDGLOVE USE? 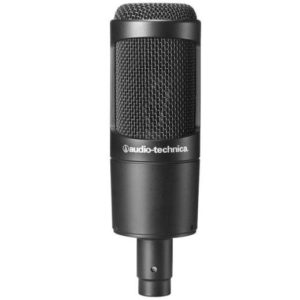 GoldGlove uses an Audio-Technica AT2035 microphone. The Audio-Technica AT2035 is a large-diaphragm condenser microphone. It was specifically designed for streaming and podcasting purposes and offers a frequency response range of 20 – 20,000Hz at a nominal impedance of 120Ω and a sensitivity of -33dB. Its unidirectional polar pattern operates at a side-address. It also features an 80Hz roll-off switch and 10dB pad on its base. It requires phantom power, thereby entailing the purchase of an XLR cable and compatible audio interface. It does come with a an external shock mount to prevent vibrations from interfering with recordings.

WHAT WEBCAM DOES GOLDGLOVE USE? 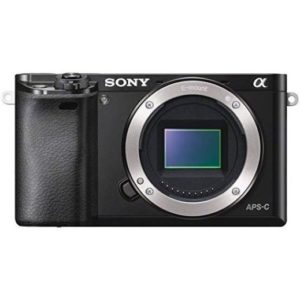 GoldGlove uses a Sony Alpha a6000 camera with a Sony SEL35F18 35mm f/1.8 lens. The Sony a6000 is a mirrorless digital camera that features a 24.3MP APS-C-sized Exmor APS HD CMOS sensor. This provides an ISO range of 100-25,600 ISO range for still images and 100-12,800 ISO for movies. It is capable of recording at a maximum resolution of 1080 at either a 60 or 50p format at 11fps. It also features Hybrid autofocus that has 179-point focal plane phase-detection and 25 contrast detect points which enable clear images even during high-speed recordings. It also has a built-in electronic viewfinder as well as hybrid autofocus with 179-point focal plane phase-detection. Additionally, its 7.5cm (3”) LCD display screen is tilt-able, which is convenient for countering glare.

WHAT MIXER DOES GOLDGLOVE USE?

GoldGlove uses a TC Helicon GoXLR mixer. This mixer that forms part of GoldGlove’s gaming setup is possibly the most popular interface among streamers. In fact, it can even be found in the setups of Sommerset, TimTheTatman and Danucd. It is a solo-recording device that can input one microphone with either an XLR or TS/TRS/TRRS microphone jack. It can provide 48V of phantom power at the push of a button, as well as provide up to 70dB of gain. In addition to a dedicated Mic channel, there is also one for Music, Chat and System. Each channel has its own slider and mute button.

The right side of the device is dedicated to special and vocal effects such as gender-bender and live sounds, as well as a bleep button and mic mute button for on-the-fly damage control. The software allows for adjustments to be made to the on-hand effects, as well as to set the RGB lighting effects. 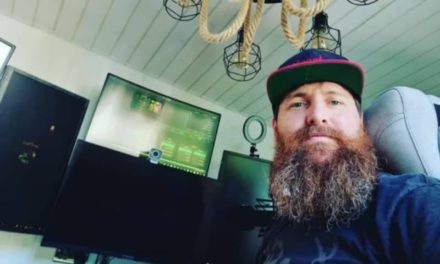 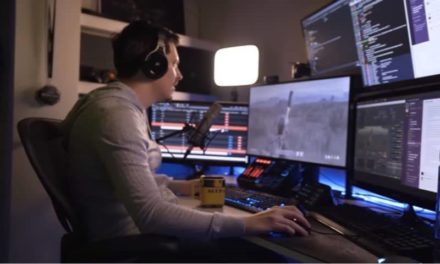 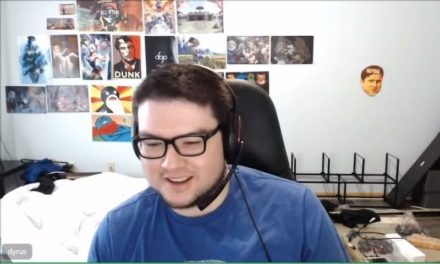 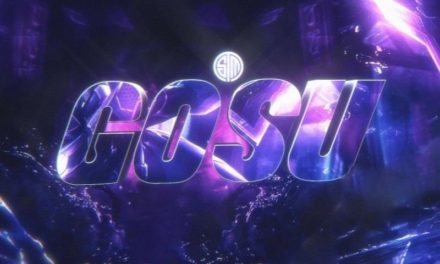