Tropico 6 – What We Know So Far

As its title suggests, Tropico 6 is the sixth installment of the city construction and political rulership simulation strategy franchise by Kalypso Media. It is scheduled for release on March 29, 2019, although the date has already been shifted in the past. The game is planned to feature solo offline gameplay options, as well as online multiplayer modes.

‘In times of political turmoil and social unrest, the people are calling for visionary leaders, who will steer the fate of their country with foresight and ingenuity. Prove yourself once again as a feared dictator or peace-loving statesman on the island state of Tropico and shape the fate of your very own banana republic through four distinctive eras. Face new challenges on the international stage and always keep the needs of your people in mind. For the first time in the series, manage extensive archipelagos, build bridges to connect your islands and use new means of transportation and infrastructure.

Send your Tropicans on raids to steal the wonders of the world, including the Statue of Liberty and the Eiffel Tower. Customize your palace at will and give election speeches from your balcony, to win the favor of your subjects.’ 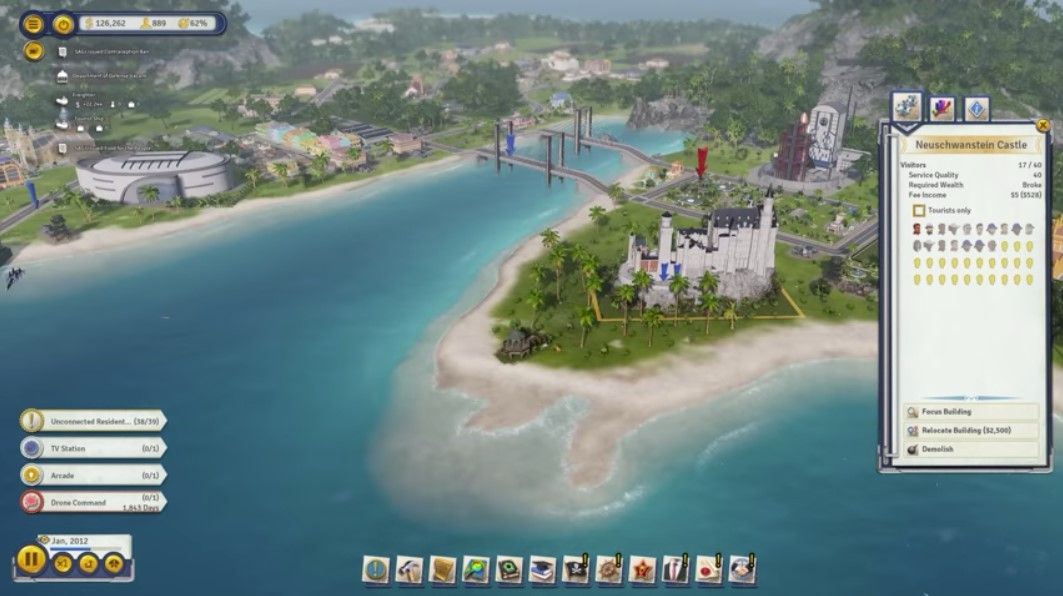 Players take on the role of El Presidente as he rules his developing island nation of Tropico and directs its economic and political standing in general and towards the two neighboring superpowers. As to whether he will be a brutal war-mongering dictator, or a benevolent ruler is up to the player. Before they start, players will be able to choose from fifteen mission maps, each of which features its own story mode campaign. Maps also feature different climate themes and layouts, with some structured as an archipelago and others as a single island.

Once they start, players will need to work through four different eras, beginning with the colonial era. They will then move on through the WWII, Cold War and modern eras. These eras will dictate the type of gameplay and structures that the player will be able to build, utilize and upgrade, as well as the type of relations and trade that they can establish with the two neighboring empires.

All eras and missions come with their own set of objectives which are listed on the left of the player’s screen. Some will be main missions, which will be indicated with a golden icon, whereas side-tasks will appear as regular items on the task list. The list will change as the player completes the tasks and will be dictated by the various in-game political factions, such as the environmentalist and industrialist factions. Players can opt to accept or reject side-tasks, but main ones will be automatically be added to the list. 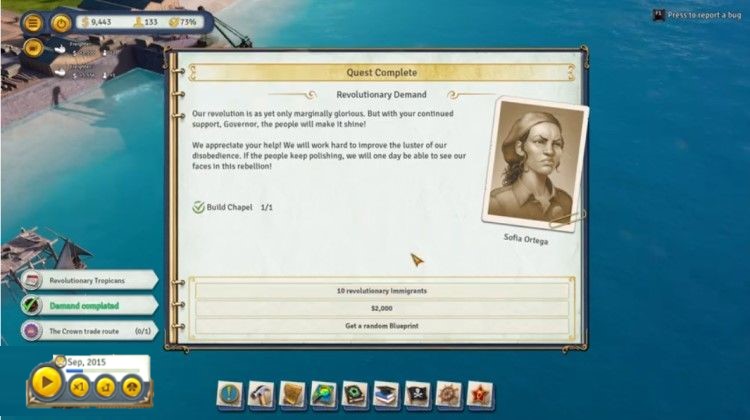 Maintaining a balance between the factions will be crucial, as elections occur every two years and each group has their own set of followers. Elections can be delayed, although the specifics have not yet been detailed. It is known that players can kill citizens or have them imprisoned, so it is possible that those would be possible methods of crushing opposition; although this will likely come at a cost later in the game as the Rebel Threat will probably become stronger as the citizens become unhappier.

Part of the election speech includes delivering a speech, if you choose. These can also help to improve El Presidente’s reelection. They can look at the areas that are failing and promise to improve upon them, for instance. This could include increased housing and educational facilities, if the player notices that there is a high rate of homelessness and low levels of education among their populace. Of course, the player will also need to address these concerns if they hope to gain the confidence of their citizens when the next election rolls round.

Players can zoom in and out and change the camera angle at any stage in the game. This allows them to view the island as a whole, or even view a specific citizen to either tap for an emote or select to view their societal function and personal stats. The implications for this are a bit vague, but it could be fun to follow El Presidente around as he purposefully marches along down the street or gives over one of his electoral speeches.

In each mission, players will start out with a limited budget, population pool and possibly a basic settlement complete with dictatorial palace. They will then need to decide on which elements to focus on to progress the economy while simultaneously meeting the current task objectives and civilian needs. 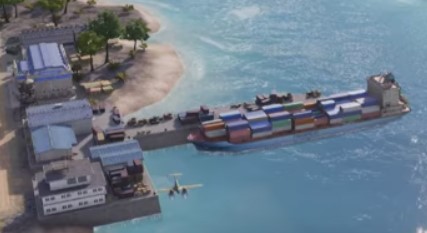 There are numerous industries for players to develop and monetize from, including tobacco, fruit and vegetable plantations, mineral and oil mining, fisheries, tourism, arms smuggling, canned food and many others. They can then review and select available trade options and select those that they feel will be most lucrative or politically viable. Of course, even if they are producing enough goods and have established good trade relations, the player will also need to ensure that there is an efficient transportation network. After all, the faster the goods are shipped, the faster new revenue is generated.

El Presidente can also import necessary goods this way. These choices will both boost the economic standing and job creation of the country, as well as impact on the island nation’s relations with its neighbors. For instance, if a player decides to smuggle arms to one country, this may have a negative impact on their relations with the other.

If players want to increase the employment of a particular building, they can select it and choose to hire foreign workers if there are not yet enough locals to fill the post. Of course, players will need to constantly check on buildings to ensure that the employees haven’t quit their jobs. If they consistently do so, players might want to consider increasing the wages for that job. However, wages delete Tropica’s salary as do other production costs. Players will therefore need to weigh these and other options before implementing them.

Other revenue sources include municipal buildings and state-owned residential buildings from which the government can offer services to and collect rent from their civilians. The same holds true for tourist hotspots and public transportation services. 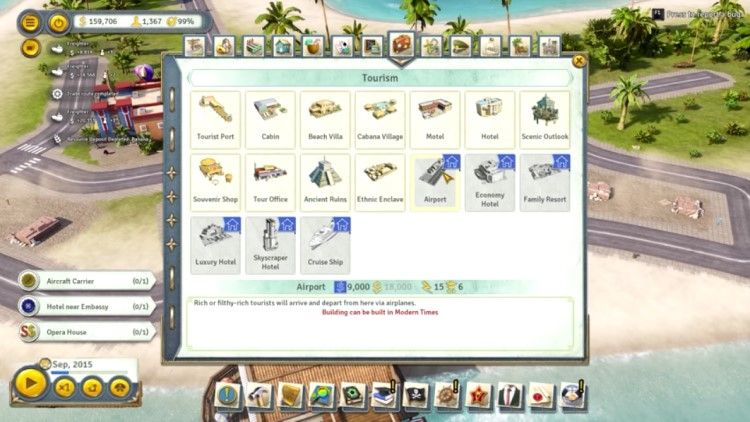 Archipelago islands can be joined by building roads, which is necessary as buildings will not be operable unless civilians are able to travel and work there. As the game becomes more modernized, players will also want to update their buildings to keep up with international standards. This includes building and upgrading powerplants so as to improve the quality of life of citizens, as well as the productivity buildings. However, once built, players will need to click on every building to apply the electrical capability. This will apply to future buildings as well.

If a building is profitable, players can also opt to upgrade it or to tweak employment rates and payrolls of employees to further improve profitability. Of course, all of this costs money, so players will have to constantly asses their income and review the profitability of all of their buildings and systems. Each building takes a varying amount of time to construct, but production can be sped up by paying extra cash for a Quick Build. Furthermore, all adjustments come with their own set of pros and cons. Generally, the more efficient the output, the higher the risk of something going wrong. There will be over 150 unlockable buildings in the game.

As players progress and earn more capital, they will be able to visit the to purchase the blueprints for new innovations, laws and constructible buildings. These new features can help boost the economy, develop the military and improve the tourism industry. Players can also spend knowledge points on research. Research points are earned by productive workers, so that is another reason to ensure that employees are motivated and happy.

Another interesting feature is that players will be able to have a covert military faction that can perform various raids, again depending on the current era. For instance, during WWII and the Cold War they can conduct espionage on behalf of one of the major superpowers or steal one of the seven World Wonders to use for tourism. However, these should be used cautiously, as they will impact Tropica’s political relations with the super powers for either the better or the worse.

Certain buildings are cosmetically customizable and can be edited throughout the game. So too, players can delete buildings and roads at any point, even when traffic is currently on that patch of road. This is an easy way to clear up traffic congestion, provided that the player has the spare cash to rebuild them. It is also questionable whether deleting populating residential housing would impact population size, or simply impact the number of homeless citizens in Tropico.

Players can also dictate the usage of the building. Meaning if it is an entertainment venue, El Presidente and decide whether he would like to leave it as available to the entire populace or to only allow the affluent members of society or tourists to frequent those spots. These choices will affect both the income generated by those buildings, as well as the contentment levels of their citizens and visitors. 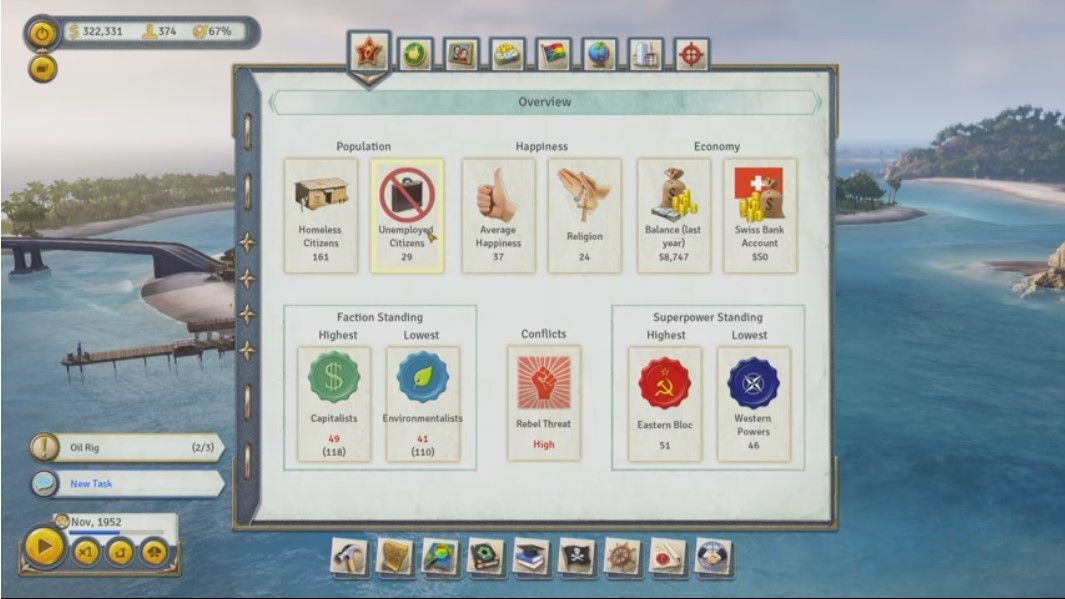 Citizens aren’t simple lemmings but have needs to be fulfilled. This includes quality of life needs such as fun and real-life concerns such as roads, decent housing and sufficient income. As long as they’re happy, they’ll work. And if they’re not happy, they might leave on their own to fulfill their needs. This could include visiting a nightclub or launching a protest, so its wise for players to keep an eye on their civilians. After all, it’s not really good for morale if El Presidente decides to slaughter a group of dissidents and will likely lead to increased resistance in the future. If players don’t have sufficient housing, they’ll build their own shacks, which don’t generate income and don’t do much for the aesthetics.

Players can do this by selecting their population tab that is located on the top left corner of the screen to review how their city and populace are doing need-fulfillment wise. If they see that their population’s overall happiness percentage level is low, they can click on that bar which will then take them to a list of possible options that will increase the citizens’ happiness level. These can include taverns, casinos and cinemas among other possibilities. Similarly, they can click on buildings to see how productive they are. Productivity includes profitability and whether they are being used or lived in. If not, El Pres may want to consider deleting those buildings and replacing them with more lucrative or useful buildings.

As players build up their city and economy, they will attract new citizens. Of course, this also implies that if citizens are unhappy, they may also choose to leave, although this is just a guess.

In all, Tropica 6 seems to make for a nice contrast to the majority of other titles that are releasing this year, many of which seem to be geared towards either open-world exploration and killing, FPS shooters and variations of cartoonish side-swiping franchises. 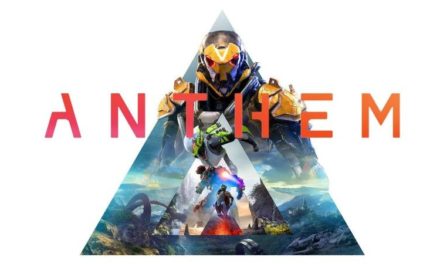